What’s going on on the technology front of the war?

While the war caused interventions on global technology platforms, it also mobilized technology leaders. Last week we brought you the news on the technology front of the war “What happened in the world of technology in the last days in the shadow of war?” We mentioned it in our article. Let’s take a look at what happened this week.

Cryptocurrency infrastructure provider Binance has announced that it will provide $10 million worth of aid through the nonprofit Binance Charity Foundation to support displaced children and their families in Ukraine.

The company has also launched a crypto-first crowdfunding called the Ukraine Emergency Fund to meet the needs of refugees and children such as food, fuel and supplies. Binance also donated 16,042 BNB ($6 million) to this fund.

It should be noted that Binance’s aid will be distributed through charities currently in the region such as UNICEF, UNHCR, UN Refugee Agency, iSans and People in Need.

Signal to close channels from Telegram

Telegram founder Parel Durov said he would impose restrictions on some Russian-owned channels if the situation in Ukraine continued to escalate. announced. In his post, Durov stated that Telegram channels have begun to be positioned as an unverified source of information.

Durov stated that he does not want the application to be used as a tool that leads to polarization.

Taking action against the Ukraine attack, Spotify closed its Moscow office “indefinitely”. Spotify, which restricts the visibility of content produced by the Russian state on its platform, removes all content of RT and Sputnik broadcasts from its platform. lifted.

Google banned RT and Sputnik’s YouTube channels after the European Union’s sanctions. YouTube accounts of only geographically restricted channels were not suspended. In addition to the content ban, Google has also activated the advertising ban.

Due to the ongoing war in Ukraine, we are blocking YouTube channels affiliated with RT and Sputnik across Europe, effective immediately. It will take time for our systems to fully accelerate. Our teams continue to monitor the situation 24 hours a day to take quick action.

Apple and Microsoft stopped their sales

Apple has announced that it has stopped selling its products. At the same time, Apple disabled some map features, just like Google did.

Shared by Microsoft Chairman Brad Smith a blog post announced that it has stopped selling its products and services to Russia.

Russia announced that it has banned Facebook. In our previous article, we shared the contention between Facebook and Russia. we transferred. Facebook imposed some restrictions on Russian media outlets spreading disinformation, and Russia threatened to ban Facebook in the country.

Nathaniel Gleicher and David Agranovich, who work on security at Meta, conveyed the disinformation attacks on social networks in a blog post they wrote. Taking action to prevent these attacks, the company, together with the EU sanctions, made its way to RT and Sputnik pages on Facebook and Instagram. brought an access ban.

Balenciaga, which stands out as a pioneer among fashion brands with its rapid adaptation to technology, has positioned its Instagram account as a support account for Ukraine. The brand, which deleted all posts on the account, shared only the Ukrainian flag image on its profile. In the stories, he shares the content prepared to inform his followers about the war and to collect donations. While the company announced that it supports the World Food Program with the link on its Profile, it encourages its followers to donate. invites. 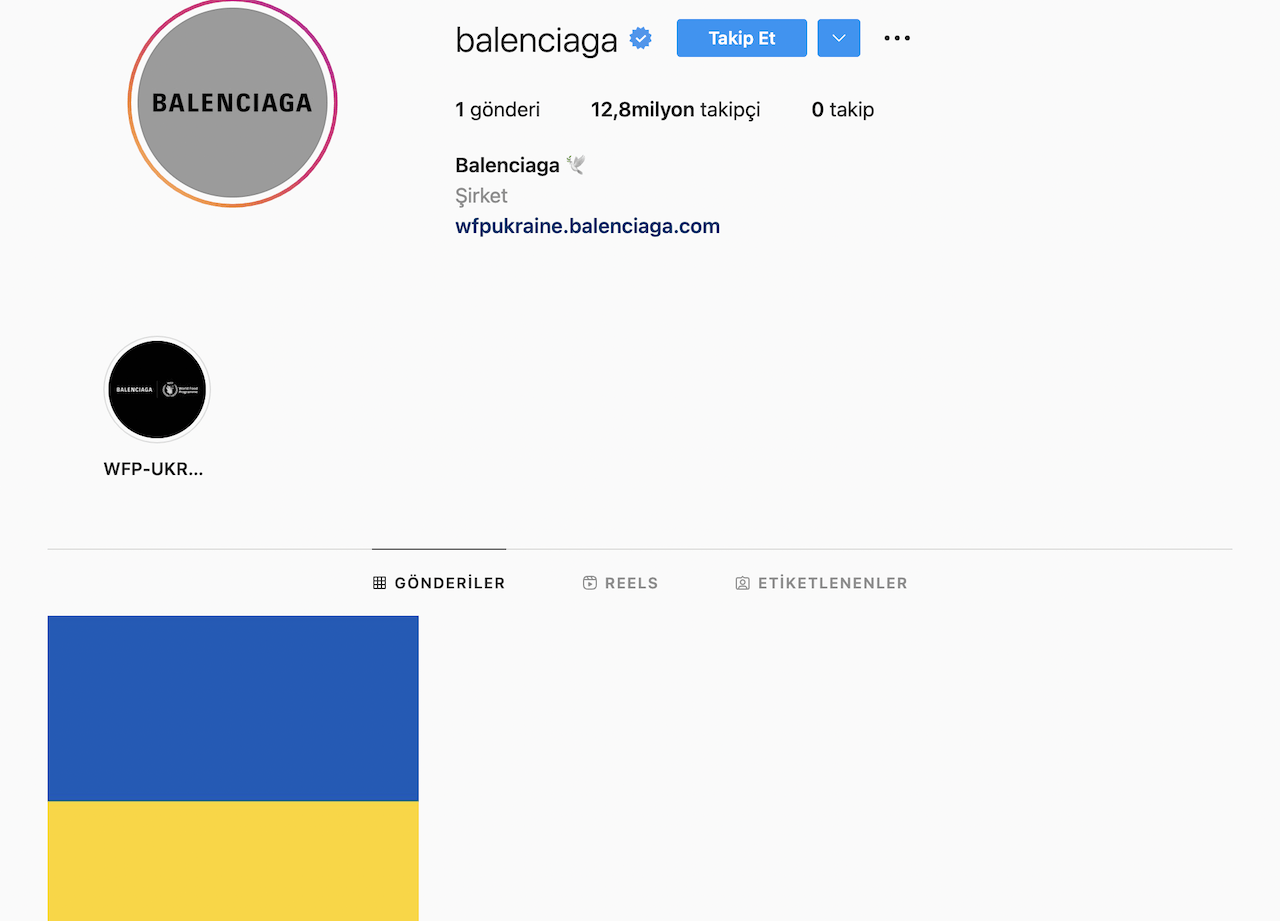 Airbnb launched a campaign to support people in Ukraine and Ukrainian refugees through its social responsibility project Airbnb.org, which has been active since 2012. Airbnb.org aims to support 100,000 refugees fleeing Ukraine.

Users took action to provide free stays only to Airbnb.org guests by creating a new registration. Existing Airbnb hosts offered their existing listings at a discount or for free. It is also possible to donate directly as part of the support campaign.

Great idea from our community. Thank you https://t.co/MEitgKB5Eo

Journalist Çağla Üren on Telegram channel and, as he shared on Twitter, the cryptocurrency community was created to raise funds for Ukraine. The name of the DAO, which was created by Nadya Tolokonnikova, the founder of the Russian activist punk band Pussy Riot. UkraineDAO.

Pussy Riot also organized an NFT sale to raise support for Ukraine. The team has released a digital version of the Ukrainian flag in NFT format. $6.7 million in donations was raised with more than 3,200 contributions for 72 hours.

We have conveyed to you that Ukraine hosts many initiatives in the field of technology, and that entrepreneurs of Ukrainian origin develop the world’s leading applications. The developers continue to do what they know best, to develop products to support Ukraine.

Products supporting Ukraine launched on Product Hunt this week. Technology for UkraineIt enables IT companies to support Ukraine by matching them with international non-profit organizations.

Anonymous does not stop: he has taken over the Russian intelligence service!

Apple’s new working order, which will return to the office from April 11

Apple's new working order, which will return to the office from April 11